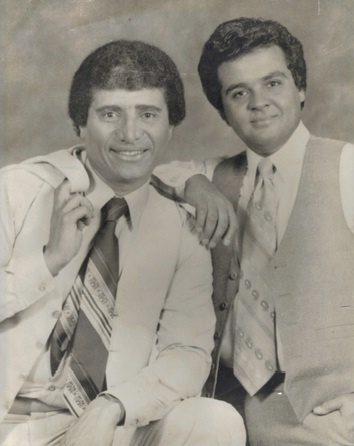 One of our favourites #salsa websites salsaconestilo.com has published the Bobby Cruz and Richie Ray’s story, the story of The Kings of Salsa. A story full of hard work, love for salsa, faith and salsa, a lot of #salsa. Told by Bobby Cruz.

From Goza la Salsa we hope all salsa lovers enjoy this story at least as we have enjoyed it or even more. And once more, we want to express our gratitude to our friends Salsa con estilo.

The story of Ricardo Rey and Bobby cruz, The Kings of Salsa, by Bobby Cruz

The story of Ricardo Rey and Bobby cruz, The Kings of Salsa, by Bobby Cruz II

Bobby locked himself in the bathroom thinking than those protector spirits had come back. Then he started to pray. Praying was very difficult for him, so he never had prayed before. In the meantime… his thought continued growing until it turned into a voice in his mind…

There, kneeled in front of the toilet, Bobby started to feel how the voice went out of his body, of this chest, of his hands… then he could feel the voice´s breah in his face…

This fact brought to him a memory of his chilhood. When he was a boy, Bobby used to play with a wooden sword made by his uncle Toribio. But Bobby did not play alone, he played with his imaginary friend. Bobby called him his Breeze friend, and he could feel its breath in his eyes…

Bobby could feel that breath again… then he asked aloud:

In that moment, his body started to bow and Bobby was near to enter his head into the toilet. He was afraid that God wanted to drown him in the toilet… but that was not true…

His body stopped bowing and a voice answered:

Bobby waited but nothing else happened. Then he asked again:

Bobby then saw Richie in white clothes, like levitating. Richie was speaking in a language that Bobby could not understand. And from the same place where the voice came out a light came out as well.

Bobby looked down, and this time, the toilet was not there. Instead, there was a hole filled with fire and flames and he was inside. Another question was asked by him then…

Bobby started to feel then how his heart was beating like a drum inside his chest… so hard he even thought he was close to have a heart attack. A new dialogue started:

– “Do no speak anymore. Let me go to bed and talk to me through my dreams”.

In his dreams, Bobby saw himself in a cell. He has his wooden sword in his hand again. He was cutting the weed and beasts where going out while Bobby was chasing them at the same time he said “Everything that breaths praise the Lord”. This surprised Bobby, because those words can be found on the Bible but he never had read it.

Those animals run to the top of a hill. When they reached the top they stood up on their rear legs and turn into humans… and then they started to talk with the same voice Richie had in Bobby´s vision. And they were bathed in the same light.

A voice from the light talked to Bobby again:

– “This is my call for you, you will bring them to me and I will turn them“.

Suddenly Bobby found himself sat in a plane in the first seat in first class. In the plane, the cockpit had the shape of an inverted horseshoe and on it was written in golden letters the phrase “What have you done?”.

When he turned around, the plane was too crowded, and Bobby thought it could not take off because the overweight.

In that moment the pilot talked to him in a language he could not understand… it was the same voice that spoke to Richie and the animals on top of the hill.

This voice told to Bobby:

– “This is not an airplane, this is my home. Tomorrow you will go there. And you will say what I told you”.

The story of Ricardo Rey and Bobby cruz, The Kings of Salsa, by Bobby Cruz

The story of Ricardo Rey and Bobby cruz, The Kings of Salsa, by Bobby Cruz II