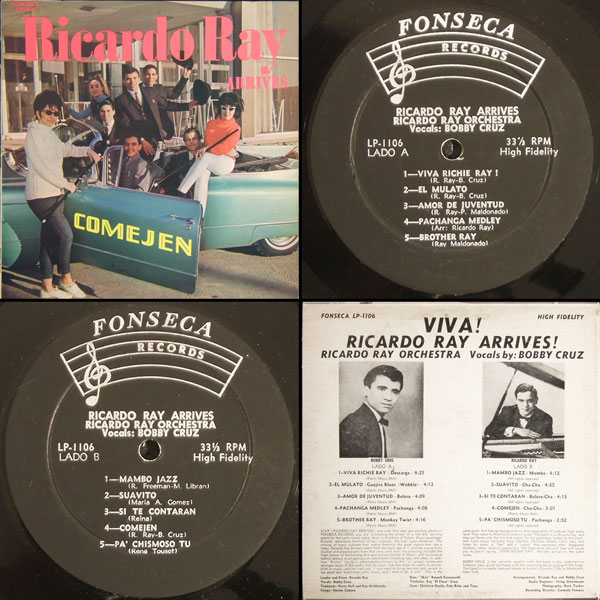 One of our favourites #salsa websites salsaconestilo.com has published the Bobby Cruz and Richie Ray’s story, the story of The Kings of Salsa. A story full of hard work, love for salsa, faith and salsa, a lot of #salsa. Told by Bobby Cruz.

From Goza la Salsa we hope all salsa lovers enjoy this story at least as we have enjoyed it or even more. And once more, we want to express our gratitude to our friends Salsa con estilo.

Bobby Cruz and Ricardo, Richie, Ray´s story started when Richie was nine years old and they met at school.

But it was not until they were twelve years old when they started to play together. And is necesary to wait until 1963 for the born of La Orquesta de Richie Ray y Bobby Cruz.

At the beginning they started to play in hotels, so they could play a different salsa. And then, get a place in the salsa scene being different from the other bands.

Their music was influenced by many different styles as, for example, afrocuban music, jazz, rock and roll even classical music…

Is still necesary wait for two years until 1965, when they recorded their first album called Ricardo Rey arrives.

The album was presented at the Village Gate. That night, they shared the stage with Tito Puente know as The King of Latin Music or El Rey del Timbal. Who has shown to be their friend and mentor throughout the years. That night, Tito played plain songs, he was relaxed and did not make his best as a gift to Richie and Bobby. Thanks to this, Richie and Bobby could show their best salsa.

In the begining of their careers, Bobby was the guitar player, meanwhile Carlos Arroyo was the singer. But Carlos did not like the sound of his voice, so he left. Carlos’ resignation pushed Bobby to act as the singer, and then his career as singer started. In his early days as singer, Bobby found the help of Rafael Dávila, Chirivico, to develop his skills as singer.

But until the album Jala Jala y boogaloo Bobby did not sing a complete album.

In 1969 Richie and Bobby had some problems with the major, so they moved to Puerto Rico. There, in 1972 they recorded the album sonido bestial

, probably his most famous album and song.


The Kings of Salsa

In those times, bands started to call themselves salsa bands. But traditional bands did not like the name of salsa for the music they were playing. They said that salsa is the thing you put on your spaguettis (remember the literal translation for salsa into English is sauce).

Richie and Bobby won the competition with a bespoke salsa song for the event, a fresh salsa titled La Zafra. This song was composed as a tribute to Bobby´s father.


At the same time they won this competition, they won their nickname as well, The Kings of Salsa, Los Reyes de la Salsa. Nickname that is still with them after more than 50 years playing salsa.